It’s in the Action: Memories of a Nonviolent Warrior 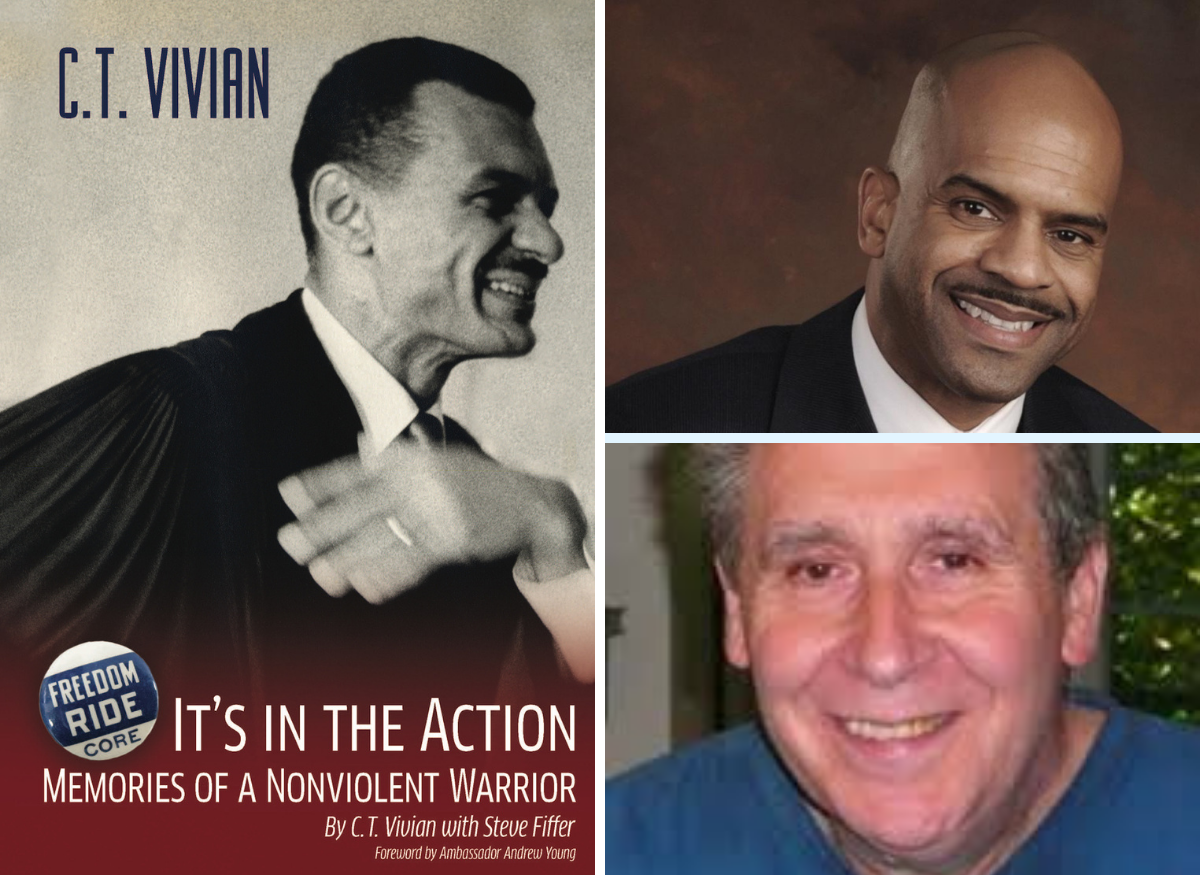 The Baton Foundation, in partnership with the Auburn Avenue Research Library on African American Culture and History, is honored to host a conversation between author Steve Fiffer and Al Vivian about the life and work of his father, Civil Rights Movement icon Dr. C. T. Vivian. This program is free to the public, but registration is required.

The wisdom acquired during C. T. Vivian’s nine decades is generously shared in It’s in the Action: Memories of a Nonviolent Warrior (NewSouth Books, 2021), the civil rights legend’s memoir of his life and times in the movement. Born in Missouri in 1924, Vivian lived twenty-four years in Illinois before moving to Nashville, where he earned a degree in theology and joined John Lewis, Diane Nash, and others to integrate the city in 1960. After being imprisoned and beaten during the Freedom Rides, he joined Dr. King at the Southern Christian Leadership Conference (SCLC) in Atlanta and played leading roles in integration and voting rights campaigns in Birmingham, AL; St. Augustine, FL; and Selma, AL. Over the next half century, he became internationally known for his work for education and civil and human rights and against racism, hatred, and economic inequality. In 2013, President Barack Obama awarded him the Presidential Medal of Freedom. Vivian passed away peacefully in Atlanta on July 17, 2020.

Vivian was never defined by discrimination and hardship, although he faced many instances of both. The late civil rights leader’s heart-wrenching and inspiring stories from a lifetime of nonviolent activism come just in time for a new generation of activists; similarly responding to systems of injustice, violence, and oppression. It’s in the Action is a record of a life dedicated to selflessness and morality, qualities achieved by Vivian that we can all aspire to. Bearing a foreword from Andrew Young, the memoir is an important addition to civil rights history and to the understanding of movement principles and strategies. Purchase books here.

C.T. Vivian was a role model for so many of us in the 1960s era of civil rights activism, a legendary champion of nonviolence, and a mighty and indispensable long haul moral warrior for justice. This memoir will give a new generation the chance to learn about his legacy of wisdom and service in his own words. ~Marian Wright Edelman, Founder & President Emerita, Children’s Defense Fund

We as students in the Nashville movement felt more mature when Dr. C.T.  Vivian was with us. I know what it is like to have your teacher in a jail cell with you for 24 hours. You never miss class. ~Reverend Dr. Bernard LaFayette

Steve Fiffer is the author of more than a dozen nonfiction books, including award winning collaborations with Southern Poverty Law Center founder Morris Dees, human rights activist Dr. Quentin Young, and former Secretary of State James Baker (a New York Times bestseller). His book, Jimmie Lee and James: Two Lives, Two Deaths, and the Movement that Changed America, was a finalist for the Harlem Book Fair’s Best Nonfiction Book of 2015. A Guggenheim Fellowship winner, Fiffer is a graduate of Yale and the University of Chicago Law School. He lives in Evanston with his wife, novelist Sharon Fiffer.