Hosea Williams: A Lifetime of Defiance and Protest 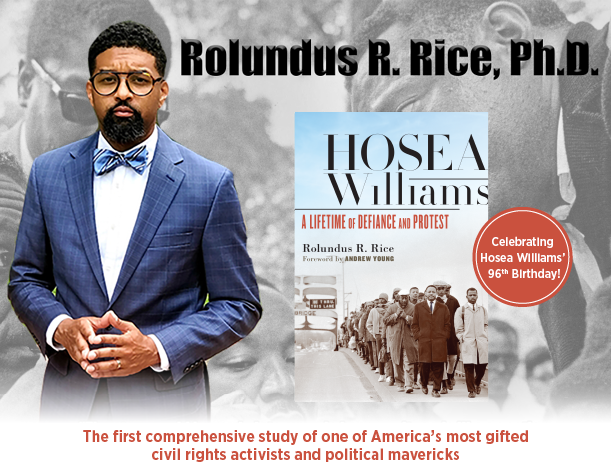 The Auburn Avenue Research Library on African American Culture and History, in collaboration with Hosea Helps, A Cappella Books and The Baton Foundation, is honored to host a virtual lecture and on-site lecture and book signing to recognize Hosea L. Williams’ 96th birthday (January 5, 1926). Dr. Rolundus R. Rice will discuss his latest publication, Hosea Williams: A Lifetime of Defiance and Protest (University of South Carolina Press, 2022). This event is free to the public, but registration is suggested. Masks are required. You may register here.

When civil rights leader Hosea Lorenzo Williams died in 2000, U.S. Congressman John Lewis said of him, “Hosea Williams must be looked upon as one of the founding fathers of the new America. Through his actions, he helped liberate all of us.”

In this first comprehensive biography of Williams, Dr. Rice demonstrates the truth in Lewis’ words and argues that Williams’ activism in the Southern Christian Leadership Conference (SCLC) was of central importance to the success of the larger Civil Rights Movement. Rice traces Williams’ journey as a local activist in Georgia to becoming a national leader and one of Martin Luther King, Jr.’s chief lieutenants. He helped plan the Selma-to-Montgomery March and walked shoulder-to-shoulder with Lewis across the Edmund Pettus Bridge on “Bloody Sunday.”

Hosea Williams played the role of enforcer in SCLC, always ready to deploy what he called his “arsenal of agitation.” While his hard-charging tactics may have seemed out of step with the more diplomatic approach of other SCLC leaders, Rice suggests that it was precisely this contrast in styles that made the organization so successful. Rice also follows Williams’ career after King’s assassination, as he moved into local Atlanta politics. While his style made him loved by some and hated by others, readers will come to appreciate the central role Williams played in the most successful nonviolent revolution in American history.

“Hosea Williams is the definitive study of one of America’s most gifted civil rights activists and political mavericks. Rice brilliantly traces the pioneering path of the talented movement strategist and protest provocateur—from his legendary association with Martin Luther King, Jr. and Jesse Jackson, to his transformative work for the poor, and his sublime agitation as a uniquely styled politician.” — Michael Eric Dyson, author of Entertaining Race: Performing Blackness in America.

Rolundus Rice holds a Ph.D. in history from Auburn University. He currently serves as vice president of academic affairs at Rust College in Holly Springs, Mississippi.

NOTE: Limited free parking is available in the parking lot directly behind the library. All other parking is paid.