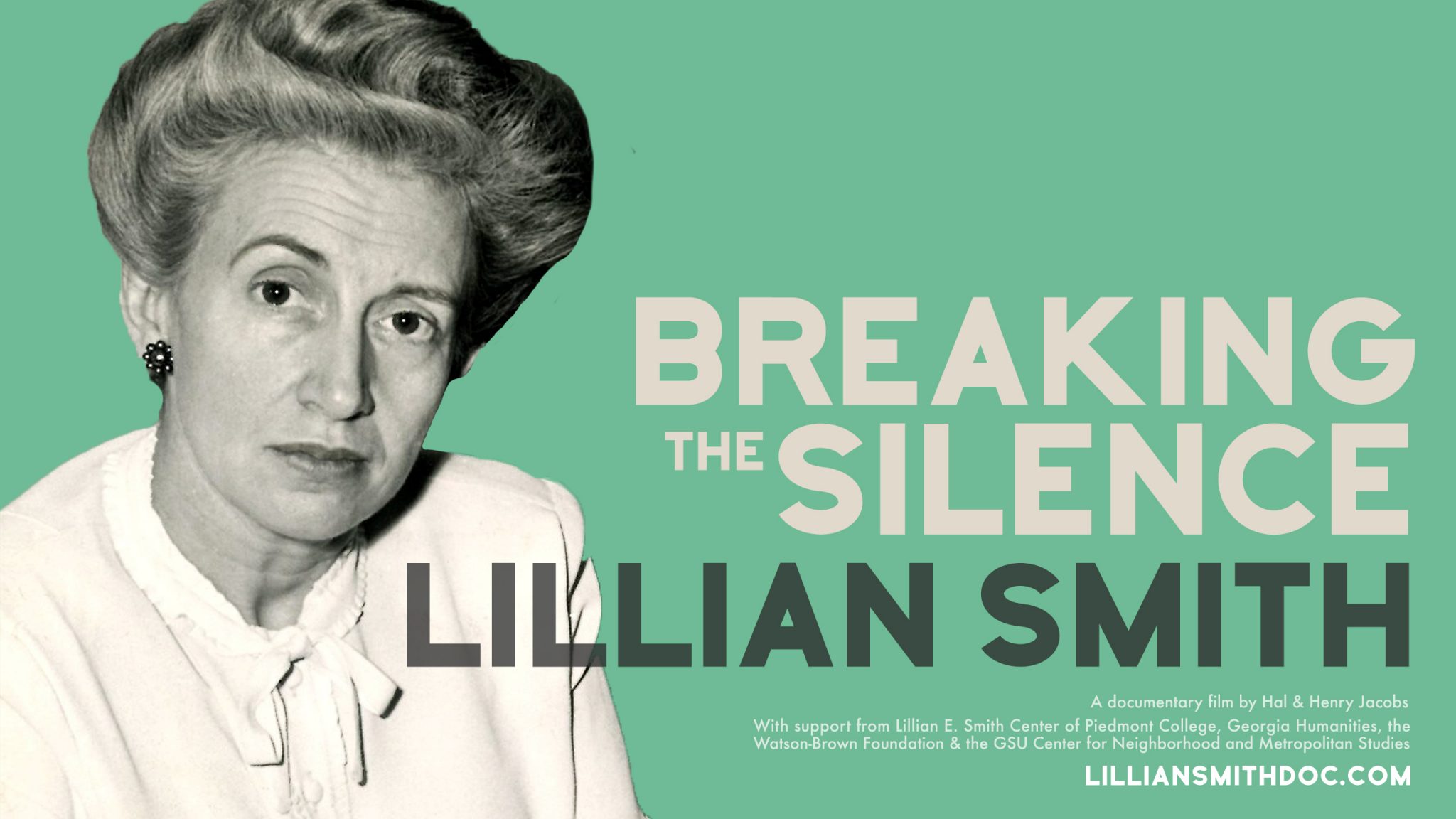 The Baton Foundation is excited to offer a screening of the documentary film, Lillian Smith: Breaking the Silence, from Tuesday, July 21 through Monday, July 27, 2020. We will host a conversion with filmmaker Hal Jacobs on Sunday, July 26, 2020. Both the screening and the conversation are free. Registration is required. Follow this link to register for talk with filmmaker.

Lillian Smith: Breaking the Silence explores how this child of the South, Lillian Smith, became a formidable voice of the South–a voice that has been muted in the decades after her death. The film also shows Smith’s relevance today as we face a rising tide of racial and other intolerance and discrimination in the United States and abroad. Follow this link to see the film July 21-27, 2020.

Lillian Smith (1897-1966) was born to a prominent family in Jasper, Florida. In 1915, they took up residence at their summer cottage in Clayton, Georgia (Rabun County). There, the Smith family established the Laurel Falls Girls Camp, working to reorganize their lives following the collapse of the family turpentine business in Florida. As a young woman, Lillian studied briefly at Piedmont College and the Peabody Conservatory in Baltimore. She also spent time teaching music for a Methodist missionary in China. In 1925, she returned to Georgia to assist her aging and ailing parents. Over time, and with the help of her longtime partner, Paula Snelling, Smith not only would run the camp, but also she would convert it into a place where like minds could gather to discuss serious social issues.

In 1944, Smith published Strange Fruit, at the time a shocking novel about interracial love. And in 1949, she published Killers of the Dream, a powerful autobiography that warned about the corrosive nature of segregation and the deleterious nature it would have on the peoples of the south–Black and White, men, women and children. Her 1954 book, The Journey, explored the meaning of the world in a time of atomic bombs and White privilege.

Some suggested that Smith was ahead of her time. Smith argued, however, that she was fully in her time. She could not look away from the toxic social conditions that repressed the lives and imaginations of both Blacks and Whites. Segregation amounted to “spiritual lynching” she said. Throughout the 1940s and 1950s, Smith used her fame to write about and speak out against segregation, becoming a champion for civil rights before the Modern Civil Rights Movement emerged in the late 1950s.

In the north, Smith became a voice of reason. In the south, she was seen as a class traitor. Even moderates like Ralph McGill belittled her—calling Smith, “a modern, feminine counterpart of the ancient Hebrew prophets Amos, Hosea, Isaiah, and Micah.” Smith wanted change and saw no reason to go slowly. She was unrelenting, uncompromising, and unforgiving towards White southerners who wanted to keep the status quo. She was threatened and endured two acts of arson on her property in Clayton, Georgia. From 1953 until her death in 1966, she battled cancer at a time when it was a virtual death sentence. She never gave up.

Hal Jacobs brings a career in freelance writing and developing written/video resources for higher education into film work that focuses on arts, social justice and the environment. The Lillian Smith documentary is his first full-length project. Previously he worked on a short documentary about Georgia weaver/entrepreneur/visionary Mary Hambidge, who founded the Hambidge Center for the Creative Arts and Sciences, the oldest artists’ residency program in the Southeast. His next project will look at a liberal arts education program taking place in Georgia prisons, Common Good Atlanta.

Henry Jacobs is a photographer, filmmaker and musician. He is also the Middle Chattahoochee Outreach Director for Chattahoochee Riverkeeper. His photography has appeared publicly in several juried exhibitions and can be found in the permanent collection of the Lamar Dodd Art Center of LaGrange College. A licensed drone pilot, he travelled to La Libertad, Guatemala in 2016 to produce documentary films for a project called Love Crosses Borders.